Radio KDNA – The Voice of the Farmworker

By the late 1970s, the national Chicana/o Movement was losing its footing. The rise of political conservatism during the1980s under the “Reagan Revolution” not only made protesting difficult, it also rolled back of many gains of the 60s and early 70s. Yet the advent of the political right in the late 1970s also prompted responses from still active elements of el Movimiento. The farm worker movement in Washington State revived in the late 1970s and 1980s, with the creation of Radio Cadena or Radio KDNA. 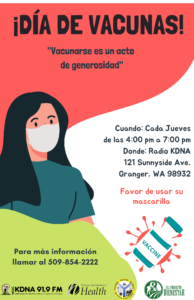 Become a member of KDNA today! Campaign on September 12th-16th. Sign up by Clicking Here for the Membership Flyer